Here's a quick rundown of the things I've dumped in high-proof alcohol recently. 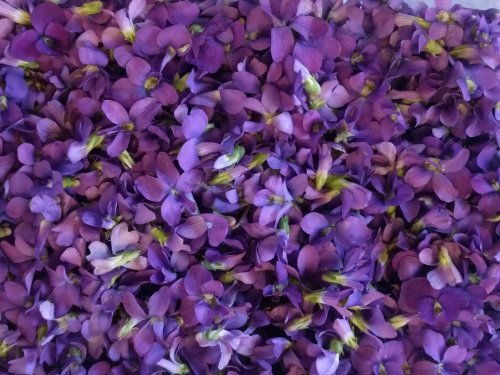 This photograph is different than the previous one of the same subject. Note the scale.

I pretty much gave up on producing anything remotely like Creme de Violet after my first attempt, but I still liked the color I got from the boring old American violets. So, with the help of some surprisingly dedicated recruits, I harvested another, even larger batch of violets from the same undisclosed location as the first batch. This time, I removed the petals from each flower (I did not get any help with that, thank you very much) so as not to contaminate the extraction with any greenery. Once again, after about 10 minutes, the Grave's 190 took on the color of the flowers. But that is where my success ended. After about an hour, the violet color began to shift towards red. I quickly strained the petals out, but the color continued to change. By the next morning, the liquid was dark brown.

I could only conclude that the color is unstable. Maybe blanching the violets before extraction would help, but at this point, I think that it's time to put this experiment to rest.

I dug a few dozen dandelions from the undisclosed location and separately steeped the flowers, leaves, and roots in Grave's 190. After straining out the solids two weeks later, here is what remained. 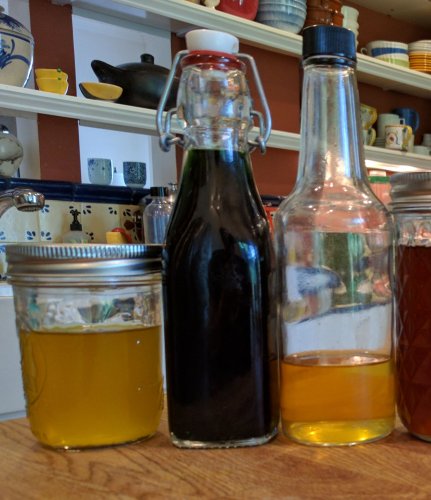 From left to right: flowers, leaves, and roots.

My biggest surprise was the color that the roots produced. I was expecting a reddish brown similar to gentian root. Instead, I got a clear vibrant yellow. The taste is an interesting mild bitter, which I think I will try out in my next batch of vermouth.

I was hoping to get a good color out of the flowers, but they actually turned out a bit dingy compared to the roots. And color wasn't the only way that the flowers disappointed. While the flavor was distinctive, that's the best thing I can say about it. It wasn't unpleasant, but it was unremarkable.

You can't really see it in the photo, but the leaves produced an incredible dark green. The flavor is interesting, bitter and slightly spinachy. The color holds up pretty well to dilution. I'm not sure what I want to do with it yet. I tried making a version of Amer DeHainaut with the dandelion greens replacing Ramazotti as the base. It tasted good, but the color was horrible (too much red added to the intense green.) I might try a straight dandelion liqueur.