As I just mentioned, my first and only attempt at fat washing was a few years ago, and was a complete failure. When trying to make bacon-washed bourbon, I used far too much bacon fat, and did not filter it very well. The result just tasted like grease.

After listening to the most recent episode of The Speakeasy, I was inspired to try again. The guest talked about her Coconut Negroni, made with coconut oil-washed pisco, and also mentioned the idea of olive oil-washed gin. So I decided to try making both of these, as well as giving bacon-bourbon a second chance.

Obviously, each fat and each spirit is vastly different, but you have to start somewhere. I decided to begin with the same proportions for everything, 8 oz spirit to 1 tbsp fat. I also didn't want to overdo the infusion step at first. I would rather get an overly subtle result than waste good spirit by going too far (remember, I'm still gun-shy from the previous bacon fiasco.) I settled on a two hour steep to start with. 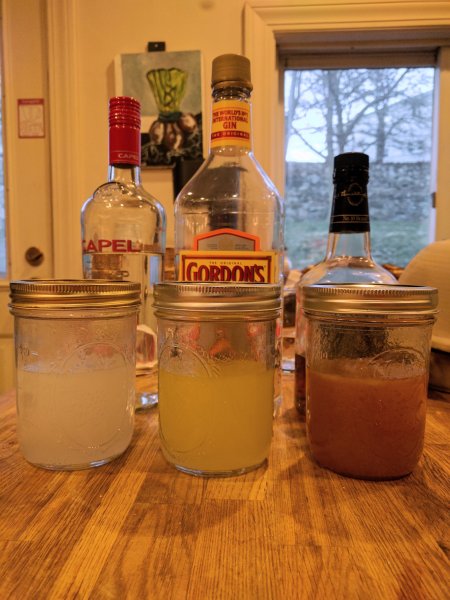 I've never done much with pisco. In fact, the nearly empty bottle of La Caravedo in my cabinet was the only one I'd ever bought until yesterday. There wasn't enough in the bottle for my experiment, so I picked up a new bottle of Capel Pisco. Naturally, I had to do a quick comparison.

Mild, flowery nose. The taste starts with a blast of sweet fruitiness, which recedes quickly. Not much of a finish.

The nose is much more brandy-like, as is the taste. Burns a little more, but not in an unpleasant way. Significantly longer and warmer finish. I definitely prefer this one.

Back to the Point

The olive oil and gin were the easiest to combine, since olive oil is liquid at room temperature. I just put the ingredients in a jar and shook them up. The two solid fats were a bit more work. I supposed I could have pre-heated the fat, but what I ended up doing was swirling the jar under hot water until the fat liquefied. Over the next two hours, I shook the jars occasionally. When the time was up, I put them in the freezer over night.

I used a mesh strainer to get the large solids out, followed by two passes through the AeroPress. The bourbon and gin came out slightly cloudy, but cleared up a bit as they reached room temperature. The pisco came out perfectly clear. 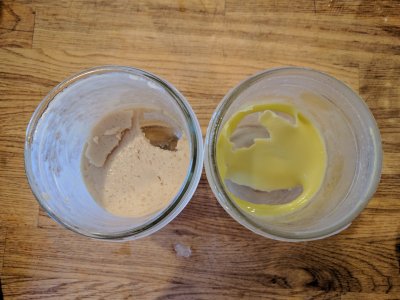 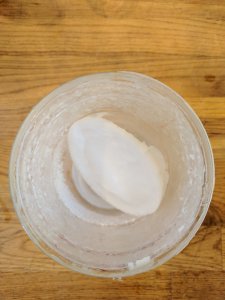 I tasted each fat-washed spirit alone, and then against it's unadulterated base.

The gin was very subtle, I could barely tell the difference without the comparison. Upon further examination there's a bit of grassiness to the nose and the early taste. The biggest difference is how the oil smooths out the finish. Gordon's gin is great for the price, but no one would accuse it of being particularly smooth. Olive oil-washed Gordon's, on the other hand, makes for a very pleasant dram.

The bourbon smells like meat. This is probably sacrilege, but it almost reminds me of Port Ellen without any smoke. The taste is not quite as good as the smell, but it's also nice and meaty. There's just a hint of the greasy flavor that turned me off last time, but it's not overwhelming. Next time I should probably use less fat, but not too much less. Again, the finish is dramatically smoothed out by the fat when compared to the base spirit.

The coconut flavor dominates, but still lets a bit of the pisco's floweriness slip through. Since both pisco and coconut are flavors I don't work with very much, I can't come up with a very good description, but I think this might be the biggest success. I wouldn't drink this straight, but I can't wait to try it in a Negroni.

My next step is to try each of these in cocktails. I'll hold my final conclusions until then, but I'm pretty excited by my initial results. The gin and bourbon need some tweaking (less bacon, more olive oil) but I think the pisco might be perfect on the first try. Of the three, the gin is the only one I might consider drinking straight.

Of course, first impressions are often wildly inaccurate. Stay tuned for a follow up post once I've made a few cocktail. If I don't write anything soon, then the cocktails must have been really good.