Programming note: Just after relaunching the blog a few months ago, work got really busy for a while. Since my last post, I have done a few taste tests but haven't found the energy to write them up. They will be posted soon, but to get some momentum going, here is what I tried out a few nights ago.

First, a bit of rambling backstory

The Boulevardier is one of my favorite variable cocktails. To begin with, it is already a variation on a Negroni, and like a Negroni each of the three ingredients can be fiddled with infinitely. Campari can be substituted with Cynar or some other amaro. Sweet vermouth can be switched out with a different sweet vermouth (or even dry.) It might seem least important that the whisky component can be anything from the vast realm of bourbon or rye. In a cocktail, whisky is whisky right? Wrong, of course, but recently I have noticed a particular case where it is more wrong than usual.

The Boulevardier is also one of my favorite lazy cocktails. When I get home from work, I can throw some Campari and whatever sweet vermouth is closest into a glass without too much effort. I tend to wind up using my remaining brain power to choose a bourbon or rye. Every once in a while, my sawdust-addled brain settles on Larceny, a lovely wheated bourbon from Heaven Hill, and that's where things get weird. Despite its infinite possible variations, most Boulevardiers do taste pretty similar. But recently, I have noticed that a Larceny Boulevardier tastes distinctly of coconut. What's going on here? Well, if you know your Heaven Hill mashbills (or if you read what I wrote four sentences ago) you will note that Larceny is not like most bourbons. It has a wheated mashbill, consisting of corn, wheat, and malted barley, rather than the more common corn, rye and malted barley. I've tasted a decent number of wheated bourbons in my time, and never noticed a coconut note in any of them, but could this be something that the Campari and sweet vermouth brings out? I devised a test to find out.

Two distilleries, four wheated bourbons, all between 90 and 100 proof. Let's make some cocktails. 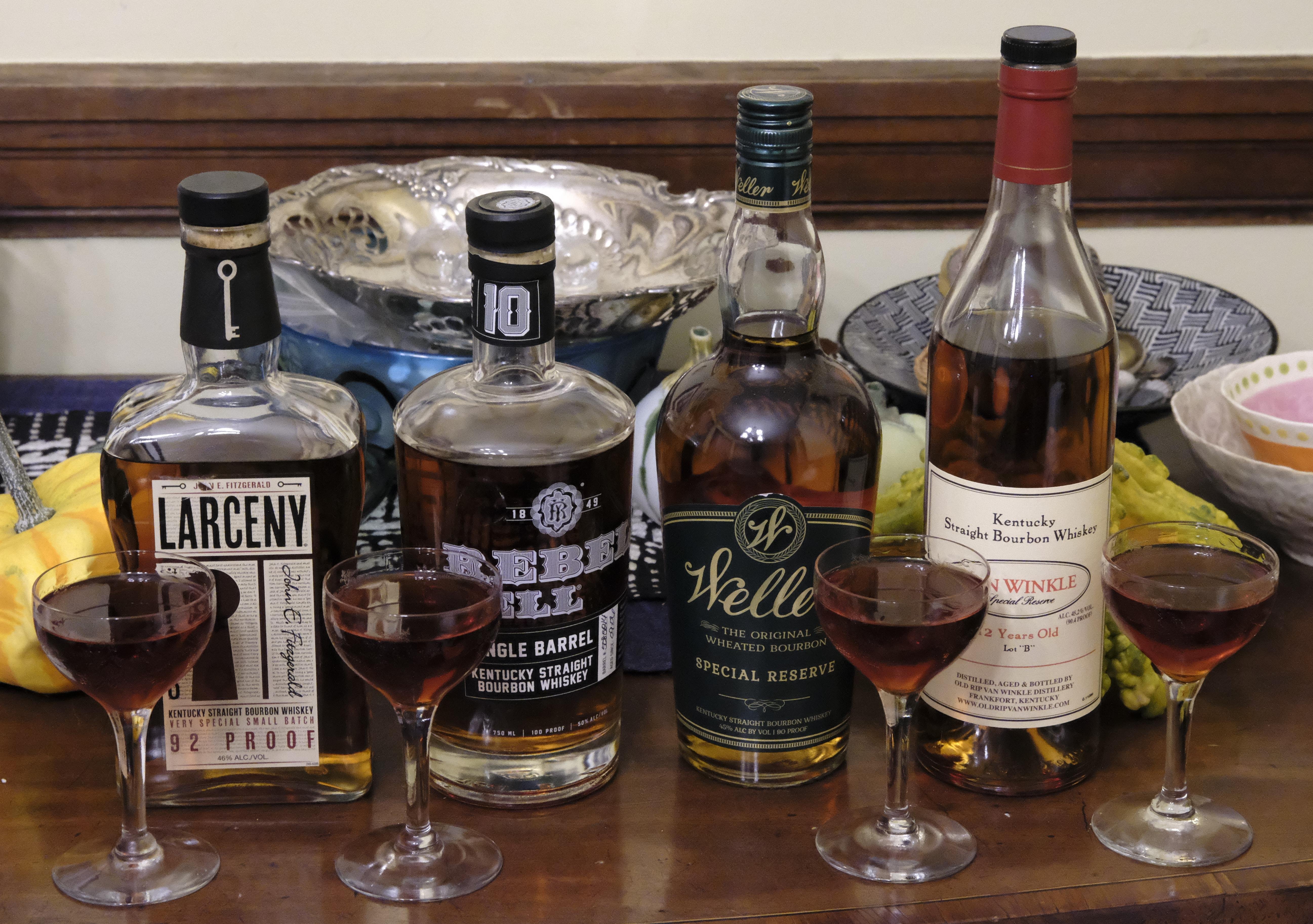 The coconut note dominates, although I noticed that it was less prominent once I had contaminated my palate with the other cocktails. Very sweet, not the best balance.

Slightly herbal. The most noticeably bourbon forward of the bunch.

Also a bit of cinnamon. Not as sweet as the Weller. I thought I detected a slight coconut taste in this one too, but that might have been a psychosomatic.

The coconut flavor appears to be a Larceny thing, not a wheated bourbon thing. Although, if I really was tasting it in the Van Winkle,it could be that it comes from the wheat, but is much stronger in Larceny.

The Boulevardier is a damn fine drink.

The Boulevardier appears to consistently benefit from an older bourbon. My favorite of the four cocktails used the Van Winkle, even though it is not my favorite of the four bourbons. It was followed closely by the Rebel Yell. Add this to the results of the Stagg test and we see a trend of barrel influence improving the Boulevardier cocktail. Among other things, this conclusion is beginning to renew my interest in barrel aging.